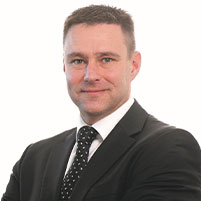 Laine holds a B.Proc Degree which he obtained in 1995 through the Rand Afrikaans University (now University of Johannesburg) and is an admitted Attorney. He started his career as a legal advisor at First National Bank, then Fujitsu Siemens, finally moving to Nestlé South Africa (Pty) Ltd where he held the position of Senior Legal Advisor from 2002 to 2007. Laine then transferred to Nestlé Switzerland corporate legal until 2010, following which he returned to Nestlé South Africa and held the position of Assistant Company Secretary until 2013. In that year, Laine was promoted to the executive leadership team of Nestlé South Africa as Company Secretary / Head of Legal and Retirement Funds, a position he currently still holds.